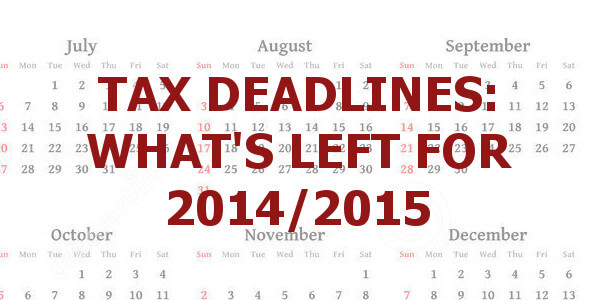 Now that we’re roughly halfway through the tax year, we thought it might be useful to look at the remaining tax deadlines for 2014/15.

This includes those for businesses and the self-employed, and works as handy reminder of your fiscal responsibilities so bookmark this page if you’re often forgetting your deadlines. Setting reminders on your smartphone is also a good idea.

Deadline to notify chargeability for Income
Tax/Capital Gains Tax for 2013-14 if not registered
for Self Assessment. Complete form CWF1 for
self-employment or form SA1 for non self-employed
income, or form SA401 for partners.

Midnight deadline for paper submission of
Self Assessment tax returns for tax year ended
5 April 2014 to be received by HMRC.

Deadline for online submission of Self Assessment
tax returns for tax year ended 5 April 2014 for
HMRC to collect tax through clients’ PAYE codes,
where they owe less than £3,000.

This a busy date for Self Assessment:

Deadline for first Self Assessment payment on account for tax year ended 5 April 2015.

This is the period when you’re probably going to want to think about sorting out your tax return. Thankfully, there are no deadlines for NICs, PAYE or Self Assessment.

There are no key tax deadlines in March.

There are also a number of recurring deadlines:

Deadline for electronic payments to be cleared in
HMRC’s bank account for any PAYE and Class 1 NICs
is the 22nd of each month.

The Employer Payment Summary (EPS) is used to notify
HMRC that no payment is due, or of any amounts being
recovered from payments. If you want the EPS to apply
to a specific month, you need to send the EPS before
payment to HMRC is due on the 19th following the end
of the tax month.